One of the first things EMS learn in medical terminology classes are anatomical directions and the anatomical planes of the body. This page can teach you the basics or be a refresher for current medical personnel.

Before we discuss anatomical planes, it’s good to learn how to talk about body structures by learning directional terms of the body. Anatomical directions help avoid confusion, prevent further injury and prevent mistakes.

Directional terms also help us to explain where one body part is in relation to another body part. It’s a way for medical personnel to be specific and easily understand each other.

Here are the most common directional terms used. The anatomical directions below are under separate headings to show how they relate to each other.

Anterior: Front, Toward the front.

Posterior: Back, Behind, Toward the rear.

Distal: Away from, Farther from the trunk or the point or attachment. Ex: The foot is distal to the knee.

Proximal: Near, Closer to the point of attachment, Toward the trunk. Ex: The knee is proximal to the foot.

Superior: Above, Towards the head, Over.

Inferior: Below, Under, Towards the feet.

Lateral: Toward the side, Away from the mid-line. The lungs lie lateral to the heart.

Medial: Away from the side, Toward the mid-line, Middle. Ex: The heart is medial to the lungs.

Dorsal: Near the upper surface, Opposite the ventral surface, Toward the back.

Ventral: Toward the bottom and front, Opposite the dorsal surface, toward the belly.

Rostral: Toward the front of the head, Latin meaning is toward the beak/nose.

Caudal: Toward the back, Inferior to another structure, Latin meaning is toward the tail.

Superficial: Closer to the surface of the body structure or organ.

Deep: Further from the surface of the body structure or  organ.

Anatomical Planes of the Body

Fans of horror films will understand how the anatomic planes divide the body because scary movies love to show the scary effect. This includes films like The Cell, Thirteen Ghosts, Ghost Ship, Resident Evil and even The Dome TV show.

Anatomical planes are hypothetical flat surfaces that go through the body dividing it into sections. They are used to describe the location of structures in the body and help with anatomical directions.

First responders and other medical personnel should be familiar with the following anatomical planes of the body.

Coronal/ Frontal Plane Definition: The coronal plane is also called the frontal plane. They are vertical anatomical planes that divide the body into front and back sections. In directional terms, the coronal plane creates anterior and posterior body sections. 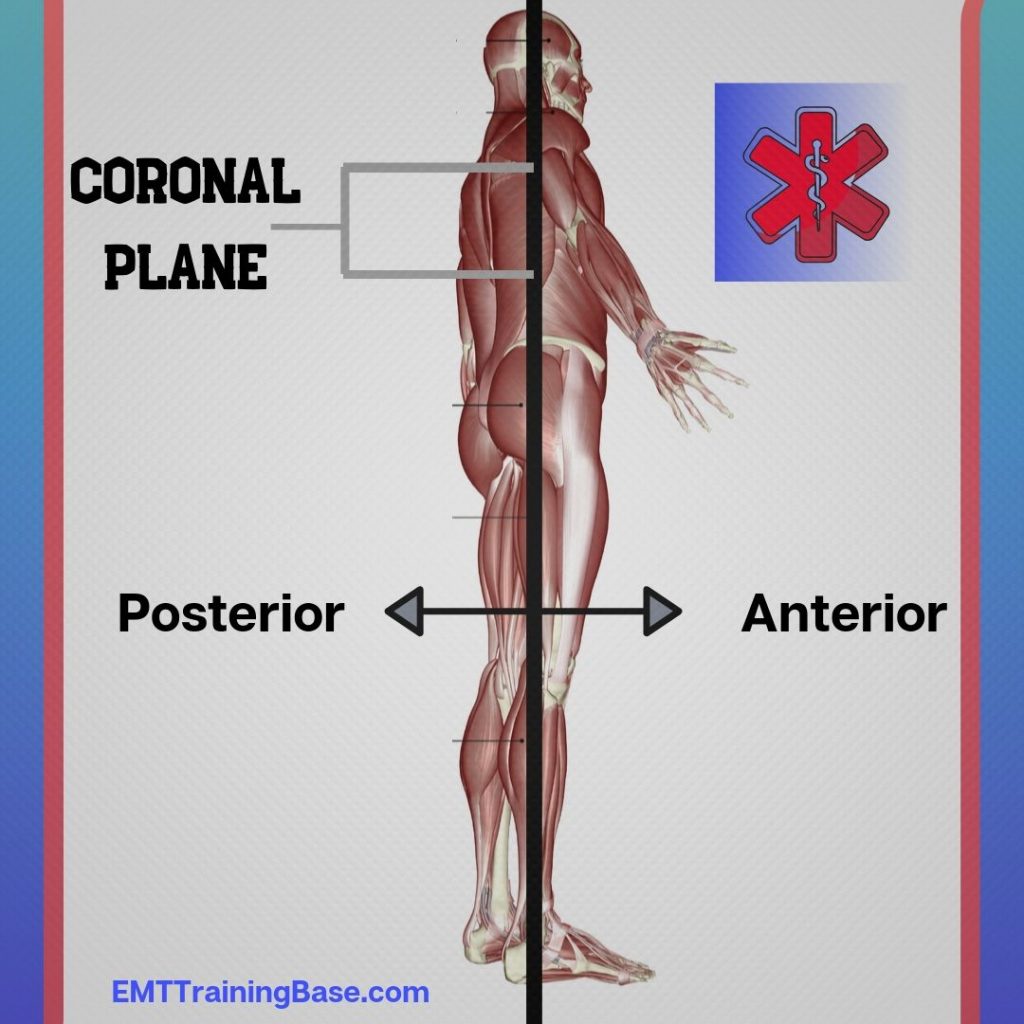 Midsagittal Plane: The midsagittal is a vertical plane running from front to back that divides the body into right and left sides. The midsagittal plane travels down the midline so the left and right side will both be equal in size.

Axial/ Transverse Plane Definition: The transverse plane is also called the axial plane. They are horizontal anatomical planes that divide the body into upper and lower sections. In directional terms, a transverse plane creates superior and inferior body segments. 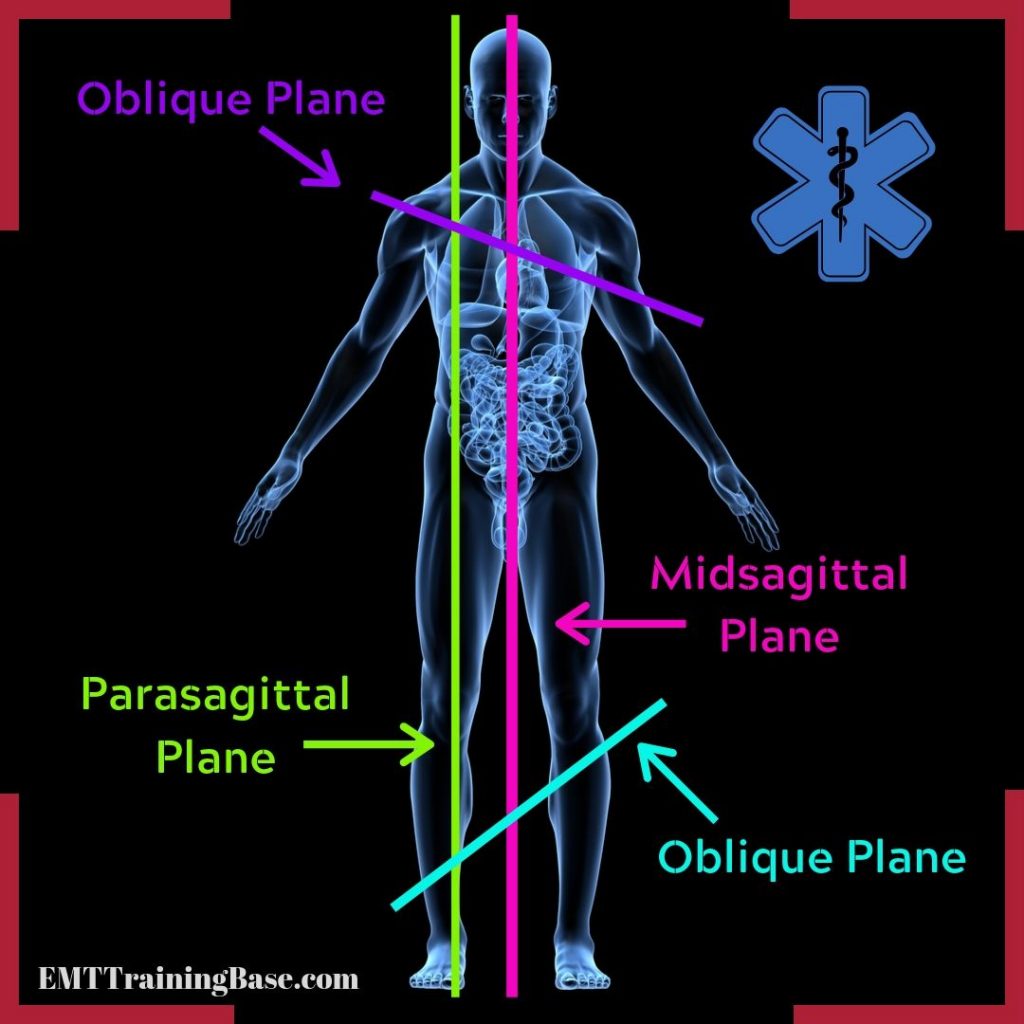 Oblique Plane: The oblique plane is used much less often than the other anatomical planes of the body. It is slanted at an angle. An oblique plane can be at any angle that is between the horizontal and vertical planes.

What is the Anatomical Position 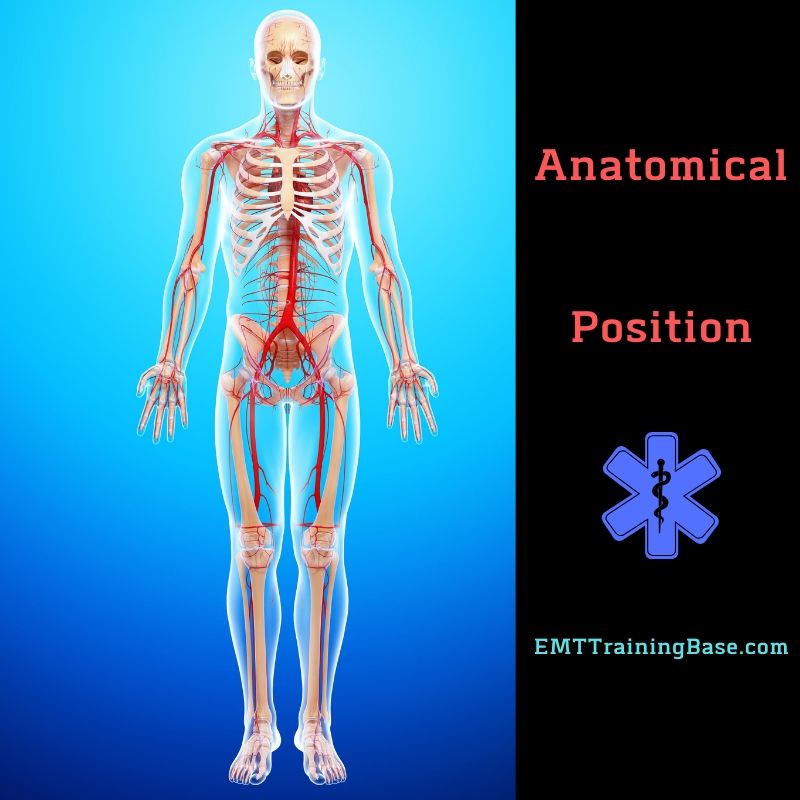 Take note of the anatomical position of the hands because this frequently causes confusion.

Take a look at our EMT Terminology page for articles on EMT mnemonics and medical abbreviations.